Home to the Black Crackers of the Negro Leagues and the Crackers of the Southern Association, as well as the early Georgia Tech Yellow Jackets football team, Ponce de Leon Park, also known as Spiller Park or Spiller Field, from 1924 to 1932, and “Poncey” to the locals, was built and opened on May 23, 1907. Before the park was built in 1907, in its place was a lake, that was an attractive spot for Atlantans to hang out in the 1800s. The lake, owned by Georgia Railway & Electric Company, was drained because of its popular location, so it could be put to better use in a crowd-pleasing area. However, they decided to leave the magnolia tree, which stood near deep center field, and still stands to this very day.

Disastrously, the wooden park was burnt down by a fire in September 1923, but in good time, was reconstructed right before the start of the next season. The new concrete and steel structure was bigger, better, and far more comfortable than the wooden benches placed before. Known as Spiller Field for a brief time, the park was recognized City Builder, an Atlanta paper, as ‘the most magnificent park in the minor leagues.” The park also hosted events other than baseball. The park hosted rivalry high school games between the Tech High Smithies and Boys' High Purple Hurricanes on friday knights and on July 1, 1940, and an exhibition between Jack Dempsey and Clarence Luttrell, in which Dempsey won.


25 years after, the Crackers played their final season in the ballpark, due to the transition the team took to the newly built Atlanta Stadium to play in. Consequently, the ballpark was put down in 1966. Now in its place lies a strip mall. Although the park was torn down, the memories the fans made there, will last forever. 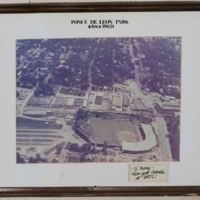