It doesn’t get much more iconic than Rogue’s Dead Guy Ale, a beer that started in the early 1990s in celebration for the Mayan Day of the Dead on November 1. Dead Guy Ale does have an appropriately offbeat creation story.  One of the most recognizable faces in craft beer has no eyes, nose or hair. His toothy grimace and crossed arms might seem foreboding, but the Dead Guy has friends all around the world who proudly toast him with clothing, costumes and tattoos. The iconic character came from humble origins. He was part of the branding for the now-defunct Portland Tex-Mex restaurant Casa U-Betcha. Rogue’s original graphic designer responsible for the classic Dead Guy label in 1990. She used a stylized version of the Día de los Muertos-inspired Casa U-Betcha image plus bare-bones clip art to put together the simple image of a cross-armed, beer-clutching skeleton sitting on a cask.

Dead Guy Ale is a maibock style ale. It’s a thick, cloudy, red-gold honey color in the glass with little to no head. The first thing you notice is a boozy sweet malt flavor. It’s flavorful, balanced, and structured without making you want to sit and contemplate every sip. In other words, it’s the six pack you want in your cooler after a long day of work. Call it a sign of the times in the craft beer world or a new way to enjoy an old classic, but as of December 2016, that six pack finally comes in cans. People are excited that this redesign might bring some more attention to what we describes as a “great, solid beer.” 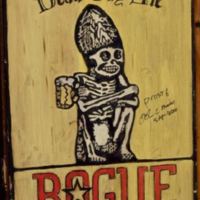