In 1956 Manuel Maloof bought Harry's Delicatessen, a sandwich and beer joint with a front of Stone Mountain granite and an interior of makeshift counters and fluorescent lights. Manuel transformed it into a neighborhood bar modeled on the taverns he had visited while stationed in England during the second World War. He filled the Tavern with salvaged furnishings--mismatched chairs and tables, booths, lighting fixtures, wall paneling--from grand old homes and stores scheduled for demolition. Later, his brother Robert joined the business.
Over the span of fifty years, two brothers, Manuel and Robert Maloof, owned this little charming bar. This framed newspaper article on the Maloof brothers gave recognition to their bar, Manuel’s Tavern, aptly named after brother Manuel. Manuel’s Tavern accurately conveyed the personalities of both brothers, a welcoming and smoky sanuctuary. Manuel, a well-know politician from Dekalb county and leading figure head in the democratic party, quickly brought attention to his new bar. They started off as a small hangout spot in the late 50’s, to gaining three more locations and expanding ownership to their nephew. By 2004, Manuel passed away, however his legacy remained, Now, Manuel’s Tavern still is one of the main attractions of Atlanta’s nightlife and a historical landmark. This neigborhood bar is still owned and operated by the Maloof family to this day. 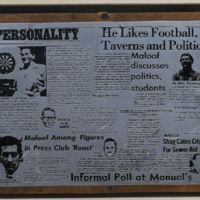