Following the death of President Franklin D. Roosevelt in 1945, Harry S.Truman became the 33rd president of the United States. He was a World War 1 veteran and Vice President of the states before the death of Franklin D. Roosevelt. During his time in presidency, made the ultimate decision to use the atomic bomb, worked to contain communism, helped rebuild post war in Europe and led the U.S into the Korean War. Obviously, he was a president during World War 2 and he was in during the Cold War.

Harry S. Truman was born in Missouri and never attended college. He was the only president to not attend college. The “S” in his name actually doesn’t stand for anything. Truman was known in his presidency for being thrown into the middle of World War II and during the Cold War. Truman was the president to drop the atomic bomb on Japan. He believed he saved U.S soldiers lives by not invading and just dropping the bomb. Truman also believed in containment. He believed the U.S should contain contain communism rather than letting it spread. Truman also helped rebuild the European nations by using something called the Marshall Plan. In this case the U.S gave 12 billion dollars which could be worth close to 100 billion dollars today. Truman was also involved in the Vietnam and Korean Wars.

However, before he two terms he served in office, he was a World War 1 veteran, a clothes store owner, and a U.S Senate. He was a senator for 10 years before Franklin D. Roosevelt asked him to run for vice president during his campaign. President. During Roosevelt’s 4th term he had a stroke a died in 1945. This led to Truman becoming the new president and getting re elected in 1949. During his final times. He had a library built in his hometown, Missouri, where he was eventually buried at when he died in 1972 at age 88. 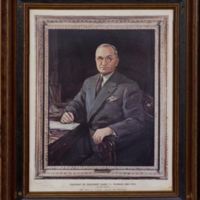